"Life is too short and the world is too big"

Many people have asked why I decided to go to Thailand and I am here to fill you in.  After four adventure-filled months in Europe, I was bit by the so-called “travel bug” and spent my summer making fake itineraries for trips to bizarre places.  One day in August, I became very motivated and decided to make a trip happen during my few remaining college breaks.  Thailand was initially on the radar because of a co-worker who had endless exciting stories from her time in the Peace Corps (Thanks Erin!).  Thailand was also so financially do-able for this point in my life and is an extremely popular destination for backpackers. So with that, my mom and I set out on a grand adventure to a place of beautiful people, bustling cities, and one too many monkeys…

The public transit in Bangkok was confusing at first, but easily the most fun part of our time there.  To get from our lodging to downtown, we needed a taxi, a train, a longtail boat (a hold-onto-your-hat cruise through the canals), and finally a tuk tuk (a hold-onto-your-head 3-wheeled motorized scooter).  Although the daily trek was long, it was by far the best way to see the city from all angles.  Our most memorable tuk tuk ride had to be where our driver insisted on street-racing the other tuk tuks at stoplights and finally crossed four lanes of opposing traffic, all while blasting the Hangover soundtrack (pictured below).

Our first stops consisted first of some easy tourist sites to combat the complete 12-hour time change. The Jim Thompson House was a nice transition, as it was the home and art collection of an American who fell in love with Thai culture. Here, we learned about some Thai customs and the process of making silk. Costumed performers were there to demonstrate traditional dances as well as show the tedious process of silk making.  Here, we learned that “tourists” to Thailand were mostly from China and Europe, with much fewer from America than we thought, giving the trip even more of an international flare.

We visited many Wats, or Buddhist temples, while in Bangkok.  What I did not know before coming to Thailand was that temples not only consist of indoor meditation spaces, but also an entire property of peaceful places, beautiful gardens, and many many golden statues of Buddha in various poses.  I came to Thailand with next to no knowledge of Buddhism, and I still have so much more to learn.

We continued our journey to the Siam Mall with many many levels and cluttered stores flooding into the main walkway.  A seasonal market was set up at the bottom where we sampled food and checked out merchants’ stands.  We had to pass through a metal detector and a bag-check in order to enter the mall.  Later, we stopped for delicious Pad Thai at the very touristy, but necessary to see Khao San Road.  Here, you are surrounded by lively people, vulgar souvenirs, and edible insects- what a time to be alive!

Our next day was filled with more chaotic activities.  We started the day by meeting up with my friend from UNH, Magna, who was visiting her boyfriend working in Bangkok.  She showed us some side-street sites with amulet markets (selling religious tokens) and introduced us to some of the ins and outs of life in Bangkok.

After, we made our way towards the very busy Grand Palace, but decided not to venture in due to the large crowds of mourners.  The King of Thailand passed away in October, 2016 and the country is in a year of mourning.  This means that most people are wearing all black or wearing a black ribbon.  The block surrounding the Grand Palace was shoulder-to-shoulder with thousands of mourners and it appeared the government was providing free meals for them.  He was a very well-respected king.  Black and white bunting lined the streets, even covering chain businesses, elaborate memorials were very frequently seen throughout the streets, and about a third of the city’s billboards had an image of him on it.

Because of our lack of motivation to wait in impossibly long lines to have maybe an hour in the Grand Palace, we instead wanted to focus our time on one of the most famous Wats in Bangkok, Wat Pho, home to Thailand’s largest reclining Buddha.  I wish I knew more about the Buddhist religion, but what I learned along the way was that the Buddha has many different positions that represent various virtues, and the reclining position is one of them.  Although this was a big tourist attraction, the temple grounds were large enough that you could easily find a peaceful corner, especially if you visited late in the day like we did. 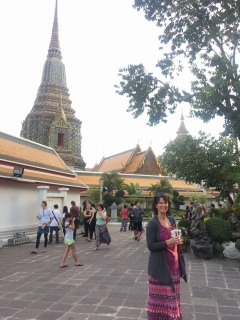 I am not too much of a city girl, but Bangkok sprung to life for me.  I was in awe of the international flare mixed with Thai culture.  Mom commented that the city was dirtier than she imagined, but I said it was cleaner than I imagined, so this is up to interpretation.  Very quickly, things such as stray cats, greasy food carts, and chaotic bundles of wires became fascinating to me.  There is something very new and eye-opening around every corner and you will never be bored!  We were completely satisfied with two very full days of touring, but I personally could not see myself staying for more than four days, as it is a city.