"Life is too short and the world is too big"

Innsbruck was a day trip planned by my study abroad program, so it was a nice break from researching trains, hostels, etc.  The week leading up to this trip was quite funny because I kept on thinking, “Oh I’m not going anywhere this weekend,” just because I wasn’t going to another country.  Because of this, I went to Innsbruck with absolutely no expectations and was blown away by its beauty. 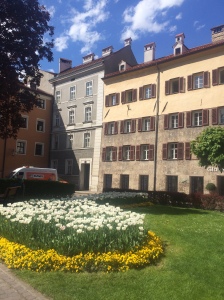 Let’s start with the drive there…  I swear that when I think that Austria can’t get any prettier, it exceeds my expectations.  The majority of our drive was in Germany, but once we crossed the border again, the sights were unreal.  The highway ran straight through a valley of impossibly large snow-capped mountains on each side.  The peaks were lined with avalanche stoppers because it is a legitimate concern for the houses below.  I can now see why Salzburg has only “hills”.

After stopping at the coolest panorama overlook, the group was treated to a guided tour of the Old Town which was very charming.  Our guide was definitely trying to one-up Salzburg through comparison, but that’s ok because we all know which is better.  A bunch of us then visited the local Folk Art museum for our class.  We all agreed that it would have been more interesting if it wasn’t academically mandatory. 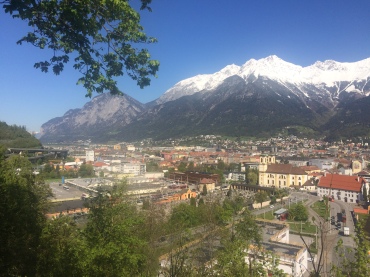 The rest of the day was spent wandering the streets and checking out the souvenir shops.  As expected, Austrian souvenirs are exponentially cheaper outside of Vienna and Salzburg.  A bunch of us hung out in the various parks in the city and enjoyed the 70 degree weather.  The River Inn that ran through Innsbruck was the brightest blue that I have ever seen in water.  We were told that it was pure mountain water.  It was definitely a much-needed relaxing day. 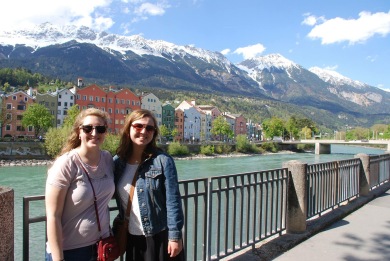 Innsbruck was the perfect amount of relaxation that I needed.  We are nearing the end of our abroad semester and it was fun to hang out with everyone in the group.  I am glad that I visited Innsbruck, but I would definitely add some sort of adventure outing for next time (paragliding, cable car up a mountain, etc.) because there was not much to do.  Regardless, I needed a relaxing day and was fine without any adrenaline rushes.